One of my favorite parts about my trip to Anchorage was a bike ride I took early Friday morning, on my last day there.

It was a 22 mile round trip on the Coastal Trail.

I decided it would be appropriate while biking to listen to this 99% Invisible episode about the great Alaska earthquake of 1964.

I had already listened to it a few years ago, but at the time the story felt like it was about some far away remote place that I was never going to see. It didn't occur to me that I had been walking around the same streets referenced in that story until the night before, when we visited Earthquake Park.

In Earthquake Park you can see some of the lasting effects of one of the biggest earthquakes in recorded history. There's a trail where you can walk down to see how far the ground sank during those 5 minutes in 1964. The ground is twisted in a way unlike anything I'd ever seen before.

As I listened to the episode I began to get really emotional. They were playing back recordings from the radio, hours after the earthquake hit. They were describing what it looked like watching the ground shift and an entire city block sink. The same city block where I had just grabbed coffee the day before. And through it all, the radio woman, Genie Chance, stayed put at the station as the voice connecting the community, sharing critical updates about emergency services and the whereabouts of missing people. 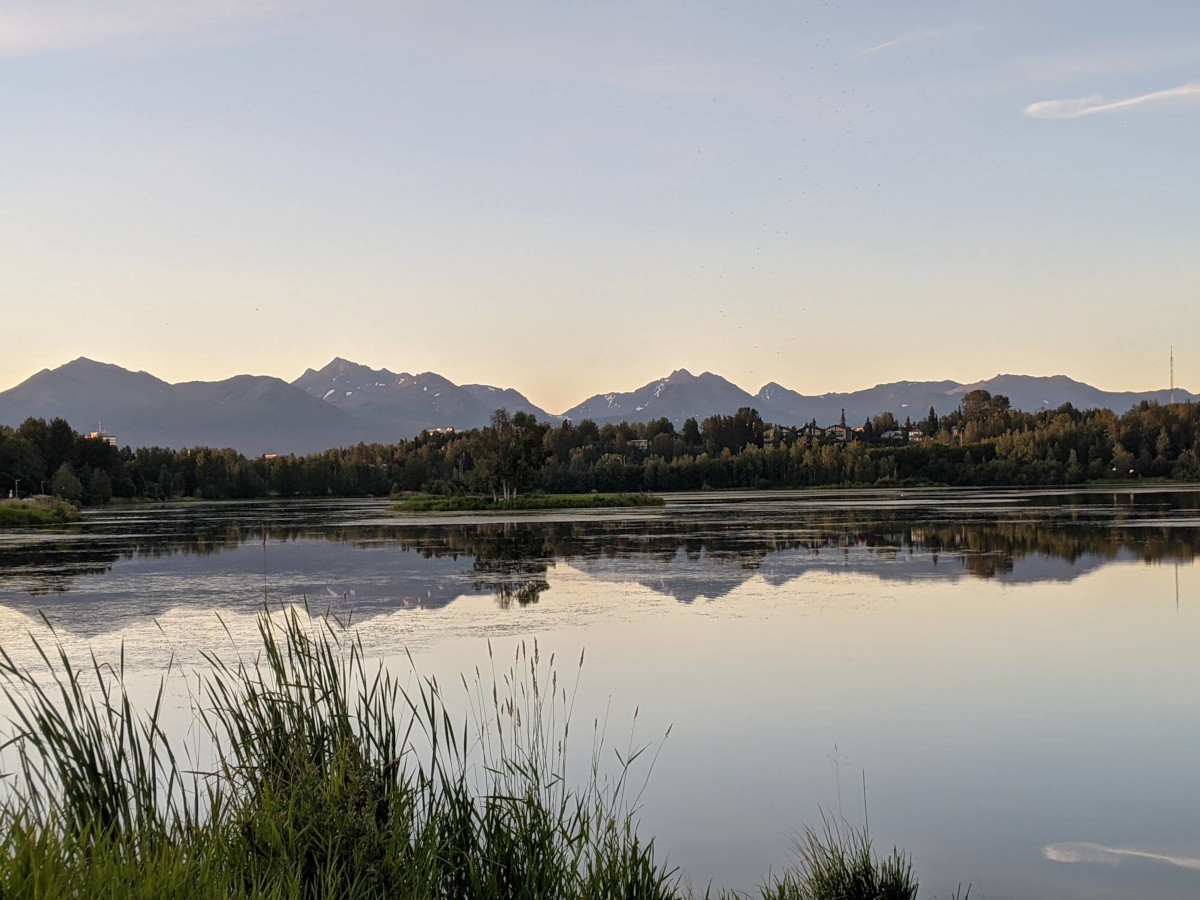 Suddenly I came upon a great hill, and the area looked familiar. I realized this was Earthquake park! I hadn't realized the Coastal Trail intersects with it. It was incredibly poignant looking at those bizarre bumps while listening to the mayor of Anchorage describe the effect this all had on him:

Even now I can look at the solid ground out the window and know that it’s not permanent. It can change anytime. It just moves. Everything moves.

I started to tear up towards the end, when they were talking about how the JC Penny building fell down. That was one of the first things I noticed in downtown, because it's huge. To me it felt like it was kind of ruining the spirit of wilderness that I had pictured here. But to the town, at the time, it was a symbol that this was a real, permanent American city. It was the first big chain to ever come to Alaska. I found myself feeling very happy that that JC Penny was rebuilt and is still around.

As the episode was ending I found myself biking in a bit of secluded spot. It was a narrow part of the trail, with tall trees on both sides, and a streak of blue sky visible above. It felt like a great place to reflect, alone in the wilderness.

Then I heard the sound of an approaching airplane. I looked up, but I couldn't see anything. The sound got louder and louder, until it finally passed overhead, directly above me. The landing strip must have been directly on the other side of the trees, because that was the closest I'd ever been to a flying full sized commercial airplane. It felt like it was just barely above the tree line, as if it was leaping just across the trees. It was so large and so close that for the moment as it passed above, I could not see any sky.

I love finding spots like this. This was a very special point on the trail that was completely unmarked and looks completely unremarkable. I could have easily passed by and never noticed it. And yet, this is one of the only spots I know in the world where you can have the experience of a commercial jet flying directly on top of you.

I like to search for meaning in moments like this, because they are so special and so rare. I like to think of it as a great ending to the podcast episode. The shock of seeing the great plane directly above me and feeling the vibrations in my body, despite the seemingly still and secluded trail felt reminiscent of how they described the surprise of the earthquake. And the mighty roar of the plane was a reminder that Anchorage did rebuild after the devastating Earthquake, bigger and better than ever.

That seems to align with the ending of the podcast, where Genie responds to her family's request that they move back to Texas, or at least send the kids back:

That Good Friday night, I knew we had survived miraculously and for this reason, there must be a purpose to our lives. Apparently the children must sense this too, for they have remained calm. They have been fully aware of the emergency but have not feared. We are proud that they are such dependable, responsible youngsters. I would not undermine their confidence in the future, in themselves, by sending them away for their safety. What is safety anyway? How can you predict where or when tragedy will occur? You can only learn to live with it and make the best of it when it happens. These children are not afraid. Their father and I are not afraid. Please don’t you fear for us.