These are my notes from reading Infinite Powers, a book about the history of calculus & how it allows us to understand world.

I picked up this book because (1) I've always found calculus scary. I understand things by recreating them with code, and this was something I could not compute (2) I'm a big fan of the author, Steven Strogatz who is currently curating events for MoMath and hosts a math podcast with Quanta Magazine. He also happens to be based in Ithaca, where I am currently.

My most significant takeaway from the book is it helped get over my fear & distaste of calculus. I always saw it as this weird branch of math where things don't quite make sense and where we have to pretend like we can compute infinite sums and somehow everything just magically works out.

I thought it wasn't something I had to bother learning anyway because any application that mattered always dealt in finite discrete chunks, and I could always compute those on a computer. (I somehow got a math major and talked my way out all calc classes).

What clicked for me was 2 things the author does: (1) make it clear that it's a mistake to think we can actually complete these infinite processes (2) regularly appealing to the natural world. The latter was the biggest thing that convinced me, showing how "real" it is by how useful it is, and how it arises from studying the world & trying to describe it. That it feels truly "part" of the universe in a way.

Here is Steven talking about the two ways to interpret infinity, completed infinity and potential infinity. 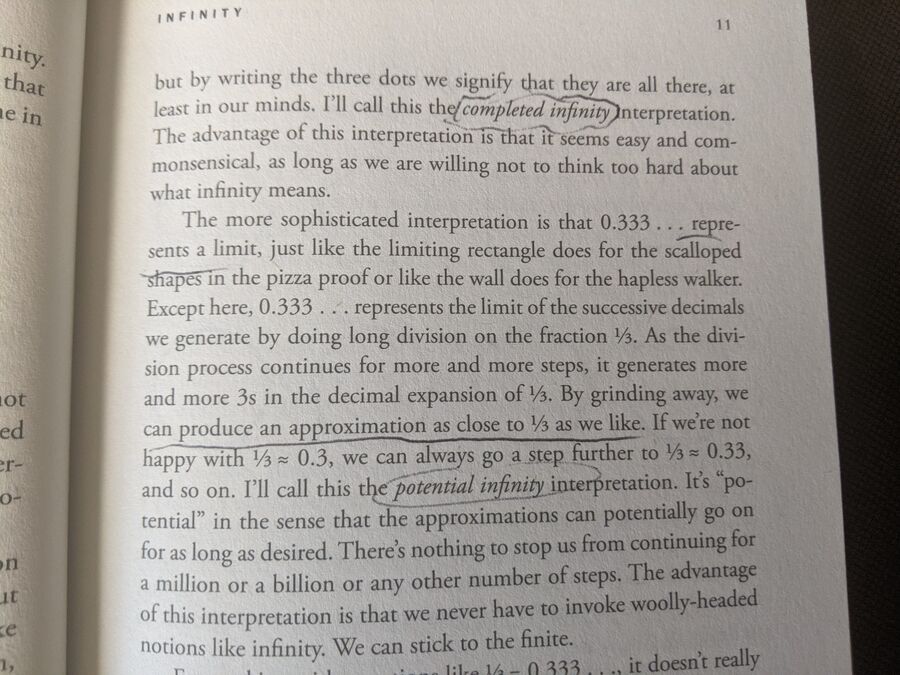 He emphasis that it doesn't make sense to complete the infinite process, the part I've always struggled with. He calls it the sin of completed infinity. 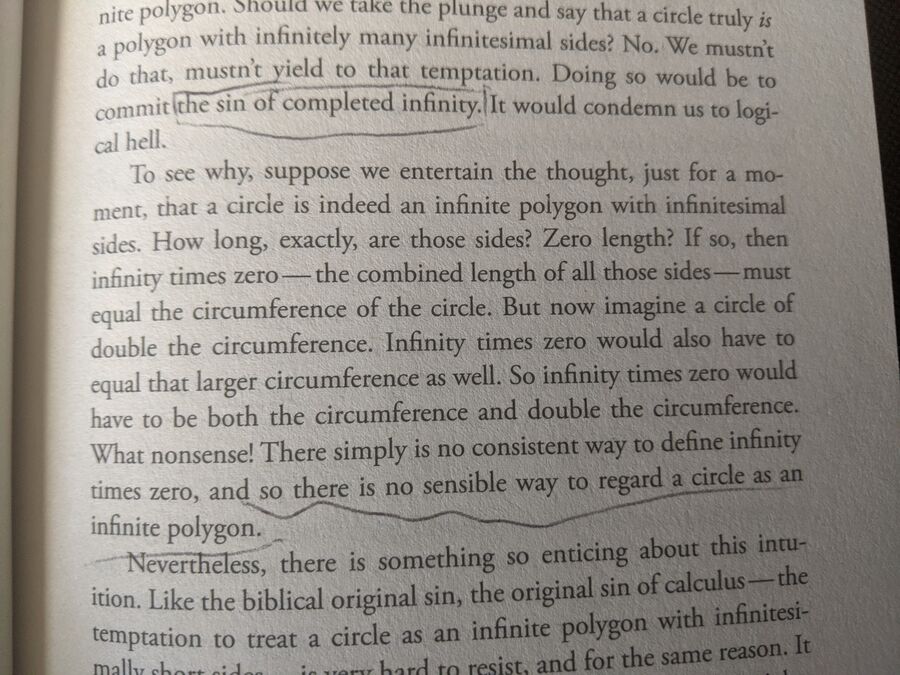 I absolutely love how he takes you back to a time when finding the circumference of a circle was an open problem that no one knew how to solve. I love the analogy to climbing mountains — it's a matter of the human spirit's thirst for adventure. They wanted to surmount this challenge that no human had ever before, not because they needed to, but because it was there. 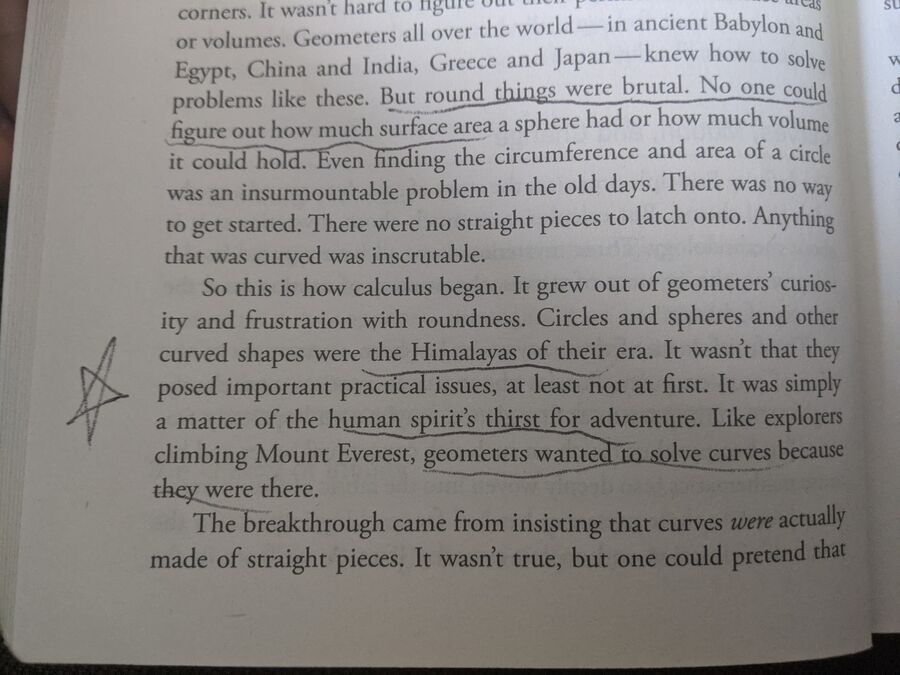 I think it's brilliant that he motivates everything with concrete, real world examples. All this talk about studying circles felt abstract & removed, until he pointed out that they arise naturally from any symmetric process. And symmetry is very common. 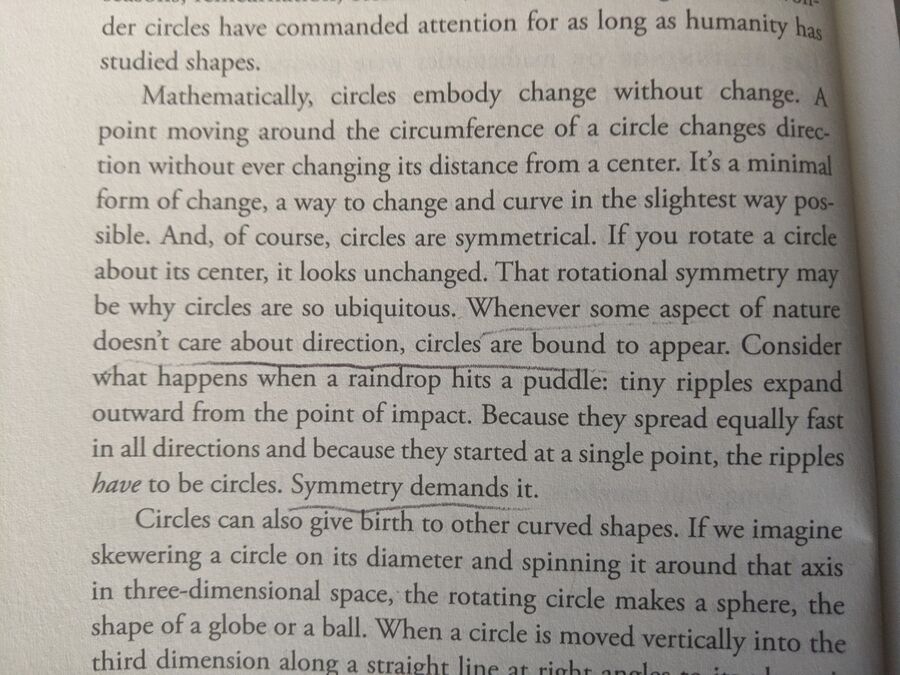 I really appreciate that he takes a moment to point out that decimals with infinitely repeating digits don't seem like "real" numbers at all, which is something I've struggled with. 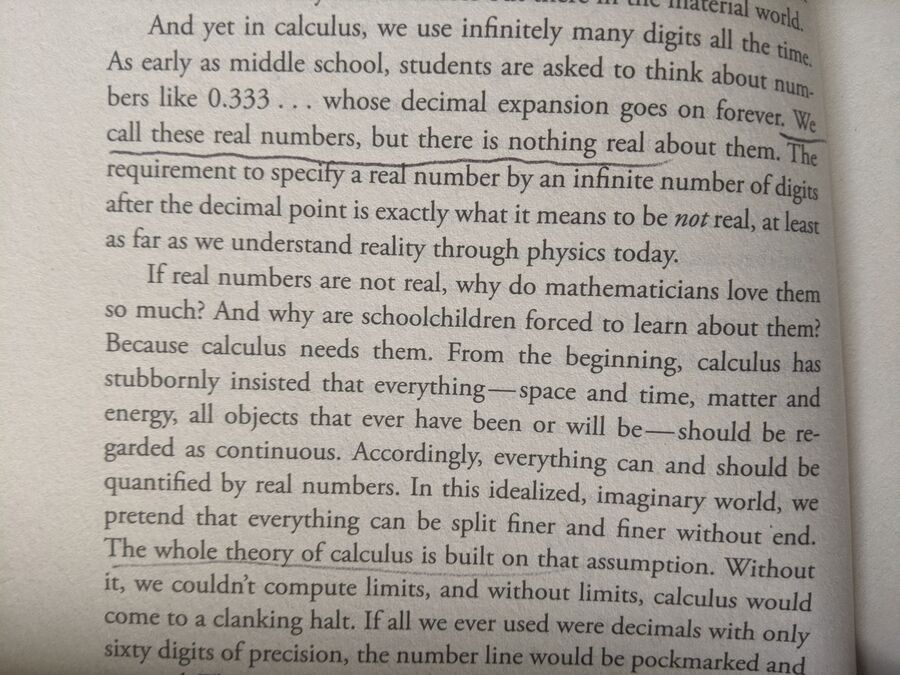 I like this reframing — think of it as a way to model the world. Assuming infinity actually makes things simpler! 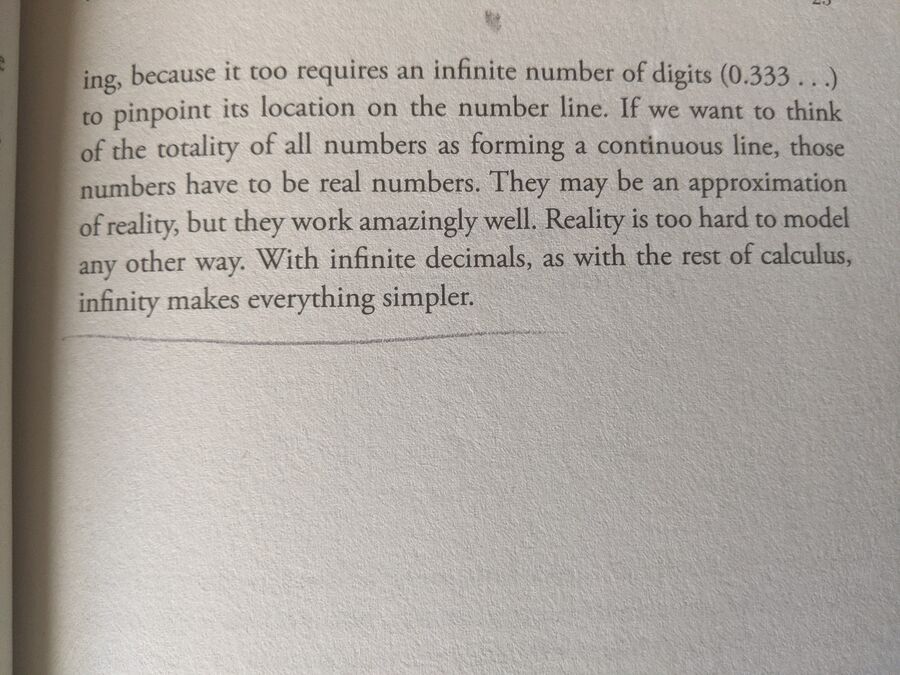 I had no idea about this Archimedes Palimpsest, the only time Archimedes ever talks about his thought process, and it was lost for centuries. I really enjoy anytime we get to peek behind great creative works like this. The development of great maths is less like a rigid scientific process and more messy & creative. 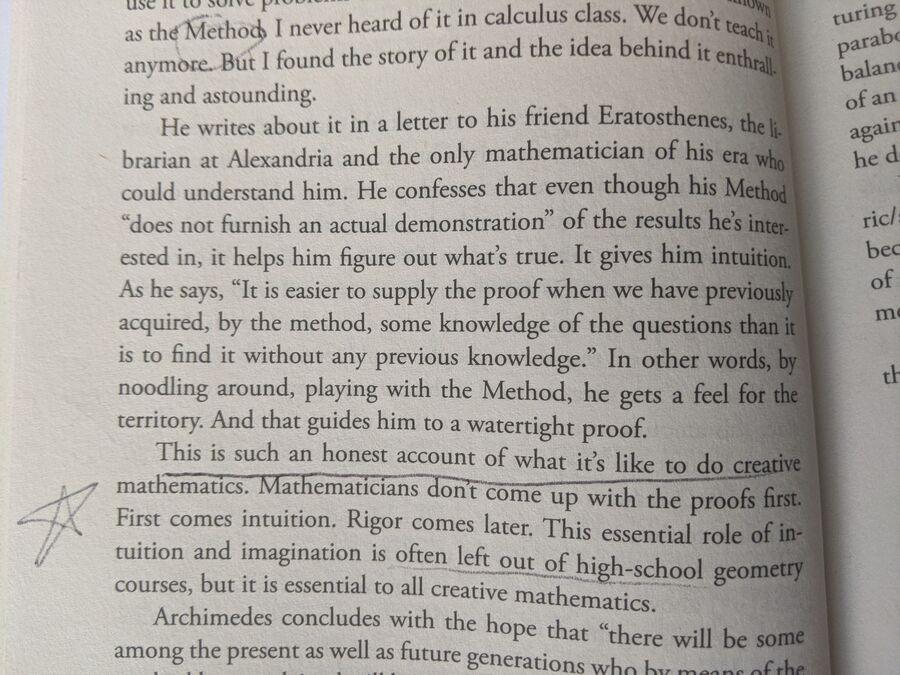 Steven does such a great job continually pausing and helping you appreciate that what we're taking for granted here was such a huge leap at the time. I love his description of number lines & graphs being great inventions. 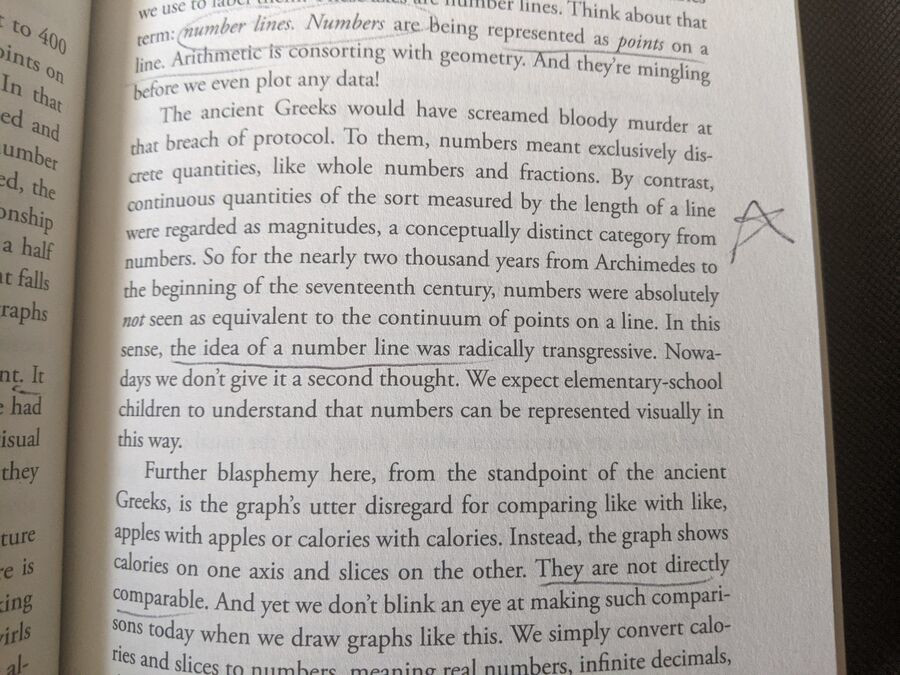 Another amazing distinction that Steven makes is between looking at the function as an object of study, and looking at it as a "footprint" of a process that we want to study. The latter appeals to me a lot more as someone more motivated by the real world. 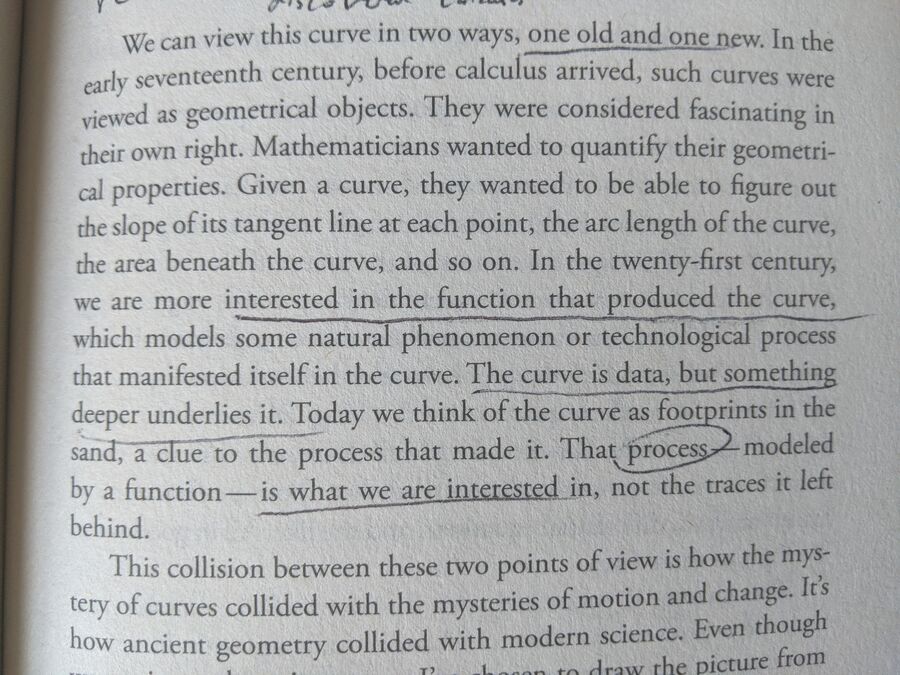 This comes up again when he talks about how getting more data points to try and better approximate the curve empirically actually doesn't help. It introduces this noise, or "wiggles".

This is really important to me because this is exactly what made calculus seem "not real" to me, when I'd try to take my empirical tools to it like this, so I appreciate the he addresses this. 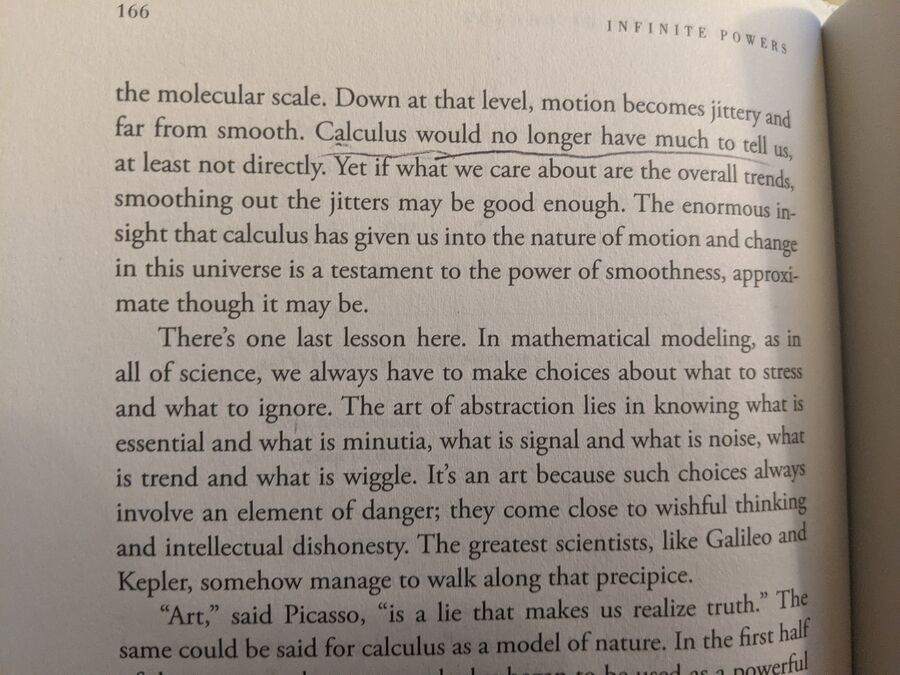 Steven's acknowledgement that infinitesimal don't really make sense gives me such a sigh of relief. This is again another idea that I struggled with so much in school. Thinking of it just as a tradeoff like this makes a lot of sense to me.

I think a lot about the story of Fermat. Toiling away in obscurity for most of his life. Creating the foundations of calculus but only because he enjoyed it. The joy of creating & discovery was meaningful enough. It inspires me because I often find things I really want to learn and pursue but stop because I can't figure out a way to share it/publish/use it in my career.

But it's OK, you can just do great things, for yourself, at the end of the day, just for the fun of it. 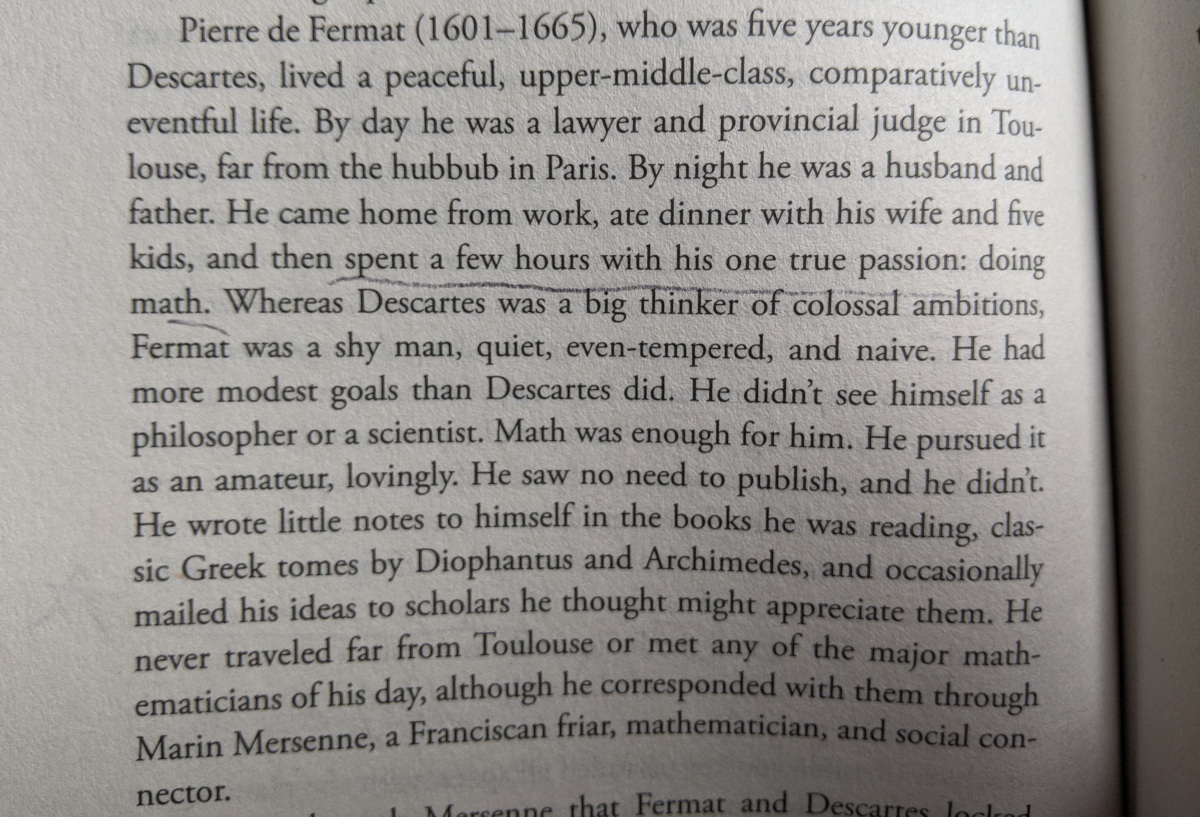